Case report: The patient was treated surgically. The tumour was completely removed through an intraoral incision. Conclusions: This is the first reported case of vascular leiomyoma arising from the floor of the nasal vestibule affecting a male patient.

Leiomyomas are benign myogenic tumors that can occur wherever smooth muscle is present. They occur most frequently in the uterus (95%), alimentary tract (1.5%), and skin (3%) with the remainder occurring at various other sites.1-3 Generally, they are divided into two main groups: nonvascular and vascular leiomyomas. The nonvascular lesions are the most common type of leiomyomas, where only a few microscopic vessels are observed inside the tumor. On the other hand, vascular leiomyomas are uncommon, include many vessels, and rarely occur in the head and neck area. Vascular leiomyomas are extremely rare within the nasal cavity and paranasal sinuses and are more frequent in females (female: male ratio is 5.66:1).1,2,4-6

Maesaka et al.7 reported in 1966 the first case of nasal vascular leiomyoma. Since then, only 30 vascular leiomyomas of the nasal cavity have been reported in the English literature. Considering their exact location within the nasal cavity, only 3 were found in the nasal vestibule.1,2,8,9 Moreover, only one of these cases was associated with a male patient, although the exact site within the vestibule that it originated from was not described.10

We present a new case of vascular leiomyoma of the nasal cavity and a detailed review of the literature. The case is interesting because this rare tumor arising from the floor of the nasal vestibule and is the first such case to appear in a male patient. We discuss the most common complaints, clinical findings, and diagnostic problems and procedures, and outline our approach to treatment. In addition, this is also the first report to show pre-, intra-, and postoperative views of a vascular leiomyoma of the floor of the nasal vestibule in a male patient.

A 68-year-old man presenting with a right-sided nasal obstruction, which he had for more than 6 years, was seen in the outpatient clinic of the Department of Otolaryngology at the Democritus University of Thrace. His past medical history was significant for mild hypertension.

Besides his main symptom of nasal obstruction, the patient reported a slight bluntness of the right nasolabial line and mild swelling of the right side of his upper lip. He had no other symptoms such as pain, headache, nasal discharge, epistaxis, or anosmia.

Anterior rhinoscopy demonstrated a fleshy, smooth-surfaced submucosal mass measuring 2 cm in diameter, without crusting or ulceration, located on the floor of the right nasal vestibule (Figure 1). The rest of the physical examination, including endoscopic control of the head and neck areas, was normal. Routine laboratory tests were also normal. No pathology of the paranasal sinuses or bone destruction was present in the X-rays of the sinuses.

Under local anesthesia, the patient underwent a complete resection of the intranasal mass through an incision in the gin- givolabial sulcus (Figure 2). General anesthesia was not given because the tumor was small and surgically easily accessible through the intraoral incision and because the patient protested strongly against having general anesthesia. The lesion was well-circumscribed, being situated just under the mucosa. No significant intraoperative bleeding was noted and the postoperative course was uneventful. The final diagnosis was confirmed by histological findings. The patient was discharged on the second postoperative day.

A preoperative CT scan was not absolutely necessary because the X-ray findings were not indicative of the pathology of the soft and bony tissues of the affected area. Nevertheless, a postoperative CT scan was performed a month later to completely exclude abnormalities in the nasal cavity and paranasal sinuses. In the two years following surgery, there was no evidence of recurrence and the patient is currently free of symptoms (Figure 3). Apart from the CT scan, follow up was based on regular clinical and endoscopic examinations.

Grossly, the specimen included the mass and the covering mucosa and was a solid, tan, soft tissue and homogenous upon cut section. The pathology showed vascular leiomyoma. The tumor was composed of interlacing fascicles of elongated spindle-shaped smooth muscle cells composed of blunt-ended nuclei (Figure 4). Many thick-walled vessels with a partially evident lumen were nested (Figures 4,5). No atypia or mitosis was seen in the muscular or endothelial cells.

Non-vascular leiomyomas occur almost exclusively in adults and show no sex predominance, whereas the vascular type occurs more often in women. Of all leiomyomas, both non-vascular and vascular, in the human body, less than 1% occur in the head and neck area.1,5

Vascular leiomyomas are benign subdermal tumors that are usually found in the lower extremities as subcutaneous encapsulated nodules. Histologically, they contain thick-walled vessels and most commonly arise from the smooth muscle of blood vessels of the above areas or from the pillar erector muscles of the skin.4,8 Nasal cavity leiomyomas are extremely rare and are commonly of the vascular type, as in our case. In a review of 562 cases of vascular leiomyomas by Hachisuga et al.11, over a 17-year period, 375 occurred in lower limbs, 125 in upper limbs, 14 in the trunk, and only 48 (8%) in the head and neck area. Only five of those in the head and neck were located in the nasal cavity (<1% of all vascular leiomyomas); however, there was no description of the patient’s sex or the exact site of the lesion.1,3,4,8,11

In addition, 25 cases of nasal cavity vascular leiomyomas were also previously reported in the literature (Table 1). Twenty-one of these 25 cases occurred in women (with an average age of years, range 24-76 years). The same number of cases out of the total were located on the right side of the nasal The reason is still uncertain. The role of estrogen in the development of these tumors has not been completely elucidated.1,3,4,8,12

Most authors support the idea that the vascular smooth muscle is the origin of the tumor. The tumor may also originate from the erector pili of the nostril hair follicles in tumors located in the nasal vestibule. The rarity of this tumor in the nasal cavity is thought to be related to the regional paucity of smooth muscle.2,8

Leiomyomas grow slowly and may persist for many years before becoming symptomatic. Pain is not a feature in the vascular nasal leiomyoma, whereas pain is a common feature of tumors in the extremities. The presenting symptoms of nasal cavity vascular leiomyomas are nasal obstruction, facial pain or headache, epistaxis, and nasal discharge.2,3,8 In our case, nasal obstruction was the main symptom.

The most remarkable clinical finding of a nasal vascular leiomyoma is a painless submucosal solitary lesion that is well-demarcated, sessile, tan, or white to blue or gray. Extensions of the tumor into the nasopharynx, ethmoid sinuses, and anterior cranial fossa without invasion of the dura have been reported. Bone erosion has rarely been reported.1,2

Radiological imaging is not helpful in establishing a diagnosis because leiomyomas demonstrate no characteristic features on either CT or MRI. However, in rare cases of extensive tumors of the nasal cavity or paranasal sinuses, the use of CT or MRI may be very important in ascertaining the extent of tumor invasion and in planning treatment.14

The differential diagnosis of nasal vascular leiomyoma includes hemangioma, fibroma, angiofibroma, juvenile angiofibroma, angiomyolipoma, leiomyoma- blastoma, and vascular leiomyosarcoma. The final diagnosis is made by histological examination. The lack of nuclear atypia with evenly distributed chromatin and a paucity of mitotic figures are important factors in ruling out leiomyosarcoma, which is a malignant lesion demanding far more aggressive treatment than leiomyomas.1,4,13,15

Complete local surgical excision is the recommended treatment. In recent years endoscopic surgery has become available for the removal of benign nasal tumors.12,16,17 Although it is widely used, some cases require a different approach such as lateral rhinotomy or transpalatal or Caldwell-Luc approach if the tumor is too large to be excised endoscopically.4,9,17 Selective preoperative embolization was used once for a very large and hypervascular tumor.4 In our case, an intraoral incision in the gin- givolabial sulcus was used to excise the mass.

The rarity of such lesions in the nasal cavity of a male patient, particularly the tumor’s location in the nasal vestibule is the main reason we are reporting this case of vascular leiomyoma. Given the above, the hypothesis that these lesions may originate from the erector pili of the nostril hair follicles appears to be logical for tumors that arise from the nasal vestibule. They can present as a painless mass with nasal obstruction and no other symptom. Among hemangioma, fibroma, angiofibroma, angiomyolipoma, leiomyoblastoma, and vascular leiomyosarcoma, these rare tumors should be considered in the differential diagnosis of any patient with a mass in the nasal vestibule. The treatment of choice for these neoplasms is complete surgical excision resulting in no evidence of recurrence. Histological examination is the only way to confirm the final diagnosis.

Summary of previously reported cases of vascular leiomyomas in the nasal cavity. This table excludes non vascular and atypical leiomyomas and five cases mentioned in the series of Hachisuga.11 ns: not stated

Figure 1: A soft, smooth-surfaced mass on the floor of the right nasal vestibule causing nasal obstruction. 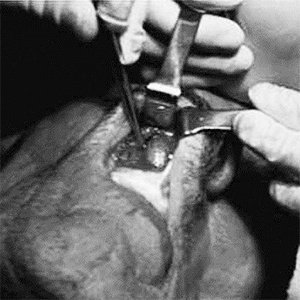 Figure 2: Appearance of the encapsulated tumour following an incision in the gingivolabial sulcus. 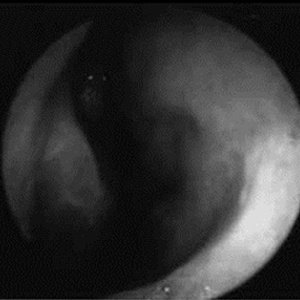 Figure 3: Endoscopic examination about two years after surgery showing a normal nasal vestibule with no evidence of recurrence of the mass. 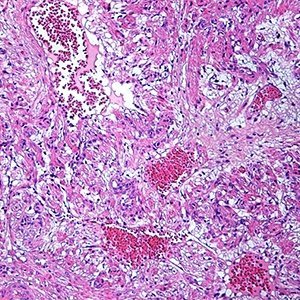